Scientific workshop on the catalog of Sultan Bayezid II’s library

On August 9, 2016, our Institute welcomed Father Christophe Roucou, former director of the SRI (Service pour les relations avec l’islam), the Muslim Affairs of the French Catholic Episcopal Conference, for ten years. At present, he is a lecturer at the Institute of Sciences and Theology of Religions (Institut de Sciences et Théologie des Religions (ISTR)) at the Catholic Institute of the Mediterranean in Marseille (Institut Catholique de la Méditerranée).

In his presentation, he focused on the introduction of the Muslim community in France. He explained that French Muslims take their faith much more seriously than Christians. While religiousness is difficult to measure by scientific methods, it is estimated that 71% of Muslims fast and only 10% of Christians are churchgoers. Concerning extremists, he said that 100 of the 2,000 mosques in France were linked to Salafist groups. The most important problem is the lack of training of religious leaders. He explained that the French Government had been trying in vain to find a solution to this shortcoming for an extensive period of time as the 1905 law declaring the strict separation of church and state prevents the German practice from being used in France, therefore, the state cannot govern the training of imams. The situation is exacerbated by the fact that as long as the French authorities do not have a say in the internal affairs of Muslim groups that operate within the territory of the state, the influence of other countries is rather inevitable. For example, the Grand Mosque of Paris (GMP) is linked to Algeria, the Congregation of Muslims of France (the Rassemblement des musulmans de France (RMF)) is domiciled in Morocco, and the Egyptian Muslim Brotherhood supports the Union of Muslim Organisations.

The lecture was followed by an informal discussion about the future of Islam in Europe and the possible integration of Muslims. 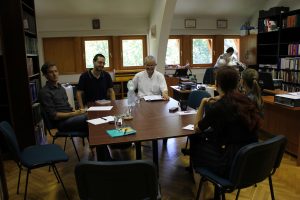 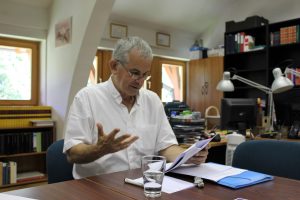